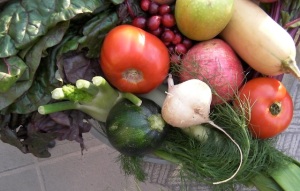 Real food has been replaced with recycled decay and chemicals.

I get international newsletters from medical and food industry reporters to keep on top of food trends, new products and the latest discoveries in nutritional understanding. In those insider news feeds come food production scandals. As I’m an organic consumer with a basic understanding of how things grow and am certified in how to keep food safe in commercial kitchens as well as a certified school cafeteria advisor in cross contamination I am still surprised and shocked by some of these reports. But more than anything it strengthens my conviction to be my own watch-dog and not to depend on the FDA or a restaurant to monitor or provide me with the food which my life depends on. And honestly, I want to be fully aware of something that I’m choosing to put into my body, I don’t want to think I’m eating something safe when it’s slowly shutting down my good health. My health is my primary responsibility, my mother handed me over the job with a great set of guild lines and I am now doing the same for my grandchildren and my cookbook readers and workshop students.

We now live in an international food economy. In case you haven’t noticed there is an incredible amount of imported food on the supermarket shelves. What kind of deals are made to make an apple worth shipping from Israel or for food to be produced in China and sold in fast food chains has always concerned me. I’m thinking about my diet and what I choose to eat. You should too. Here’s why:

Summer 2014, Shanghai Husi Food, a meat processor owned by Illinois-based OSI Group, was embroiled in a scandal that saw some of the executives arrested after a TV news team broadcast spy footage of practices at it’s factory. These included the relabeling of expired meat as well as unsanitary practices. A number of international fast-food chains, including McDonald’s and Pizza Hut were forced to apologize for buying meat products from the company.

Then a few weeks later police seized 12 tons of yogurt candy that had been tainted by melamine, the chemical at the center of a 2008 scandal in which six infants died and thousands were made sick. The police found stock during a routine sweep and found that the operation was widespread across China. 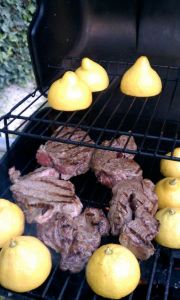 Home Cooking is best when you know your supplier.

Other scandals that year alone include rat meat being sold as lamb, pond water being used to pump up the weight of lamb, oil being salvaged out of drains, old cans and sewers and then resold. The gutter-oil gang had been selling gutter-oil to 17 different dealers in China since 2006 and made an estimate 8million$ profit, these oils contain carcinogens and unpleasant bacteria. There are still no China-wide standard for edible oils, but analysts say that the use of gutter oil is dropping in Chinese kitchens. Well, hallaloo and BooHoo.

A Wal-Mart employee in the Shenzhen, China store for 8 years exposed footage of expired meat being cooked in oil that was changed only once a week and sold to consumers, as well as rice that was insect infested. I have to wonder what the company’s policies are world-wide? I know when I walked through a Wal-Mart food department all I saw was GMO’s. Genetically Modified Organisms are products that has had their DNA altered to extend shelf life, expand production, minimize insect infestation. In fact, here is the shocker: some GMO’s actually qualify as insecticides. So I know that my body has little ‘bugs’ that keep my intestines healthy and I don’t want to be eating insecticides.

But it isn’t just international companies that cause scandals. There were meat washing plants that closed last year from using ammonia to wash decaying meat, they weren’t shut down by the government inspectors because what they were doing wasn’t illegal (!!!!!!~) they shut down because the scandal exposed the companies that used their rotting meat and the consumers created less demand and then – and only then -were some of those factories were closed. I’ll never forget those men in suits justifying their business: “this has been a common practice for decades and it is not illegal.” Finally an employee had an awakening and filmed the practice that they must have all known was wrong. Some lost their jobs but I must say that I expected more from my fellow humans.

When questioned about the nutritional abuse of the amount of salt and fat on the Burger King menu the CEO answered a TV news reporter with: “We are all responsible for what we choose to eat, I don’t eat our burgers more than one a month, ” yes sir, and I bet that you only do that because you’re in some meeting where it would be suspicious if you didn’t eat that damn poison burger. And you probably follow it up with a potassium pill. 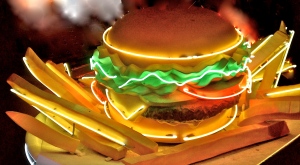 Is fast food the only U.S. contribution to the culture of food?

I question food that is cheaper than I can make it in my own kitchen: hummm staff (OK only half minimum wage and less than half legal citizens), linen or paper, I mean how much do those fast food restaurants spend on the paper goods? What % of the budget of your meal is spent on printed tray liners, printed and folded boxes, waxed tissue paper, plastic forks, the packet the ketchup is in, what’s left to spend on the meat or the potatoes. No wonder the public doesn’t believe that the eggs are real in the MacBreakfast, well that and the fact that it looks and tastes like plastic.

I used to think that law suits against food companies were frivolous and made the lawyers rich with no regard to change. The McDonald’s coffee cup scalding a driver comes to mind. But! All take out coffee cups now have a corrugated ring that keeps all of us from being burnt while handling take out cups.

I was in on a podcast recently with food producers listening to a successful lawyer. To be honest I tuned in expecting to hate the money grubbing lawyer. What became clear to me, was that these lawyers are taking on companies that are completely out of control, all of the above actions involved a watchdog reporting a situation and lawyers forcing a change in regulations by governments that absolutely need to regulate and stop the madness. All the questions from the food producers concerned how they could get away with the issues being discussed.

So foie graus is now legal in California again, but they were selling $50 toast point with free foie graus anyhow. So vote with your dollars blog reader. That’s how gluten free packaged food has gotten so much better, supply is brought by demand. Demand that your supply is fresh and what it claims to be. Demand it at the point of purchase and from the manufacturer. You can make a difference and you can help create the change that has to happen. 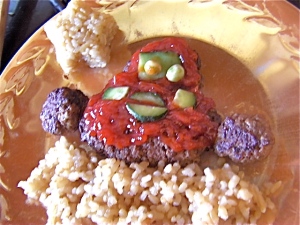 What the hell has happened to our food?
<img

Error: Twitter did not respond. Please wait a few minutes and refresh this page.